The following is an idea for a revamped version of Animal Jam's battle system exclusive to the Expedition Adventures. However, this is only available for normal enemies, whereas bosses still have their average fight mechanics.

While approaching a phantom or other enemy, a timer will appear above their head. Once the timer is up, the battle will start. It will reset and disappear once the player takes a step away and flees. Optionally, the player can also tap the icon to engage instead.

Whenever it's your turn, you got seven options: Attack, Special, Item, Act, Flee, Defend, and Transform. Each action depends on your stats and element.

The most basic option, in which the selected character uses an attack against the enemy. Your basic attack is throwing boomseeds or anything related at foes, while the other attacks depend on the character's stats, element, and unique tactics. Before actually releasing their attack, the player must press certain buttons at the correct moment. The more accurate the pattern is, the more damage it takes.

Specials are basically enhanced attacks with stronger damages and also depends on the character's stats and techniques. They usually take a knockout to the enemy.

Unlike normal items you would normally find outside of the Expedition Adventures, these items can be used out of and during a battle. Equipping or using an item to a character would give a certain effect to them, offensive or defensive. Items that have been crafted by the player can also be used in a battle.

Inspired by the Undertale fight option of the same name, the Act option makes your character use any action besides attacking enemies. Your starter acts are Info, Compliment, Ask, and Trick, and will earn more as the character levels up. Meanwhile the Flee option says it all: the player's party flees the battle. The chances of successfully fleeing a battle depend on the amount of acts every character has performed in total.

The Defend option makes your selected character defend themselves, skipping a turn in the process. Enemy attacks will take less damage when defending. The stronger your defense stat is, the more likely your defense will deflect the enemy's attacks.

This option is exclusive to the player's current animal avatar, which turns them into their alpha form. It mainly depends on the player's main element, which can be unlocked by doing five quests related to a certain element in a row after earning it in Alpha Camp. The transformation depends on the element, and will double the player's stats. However, this only lasts for one turn, and the critter will turn to normal afterwards.

For the elements independently, see Jamaan Elements. Note that I do not own nor have created the article and that I am just simply impressed by the concept and would like it added into the AJ lore.

When leveling up with an NPC that has a positive opinion over the player, there's a chance they could become a partner to the player whenever they play an Expedition Adventure. Each NPC has their own unique kind of attacks, acts, and specials. For example, Taz can strike blue lightning at enemies as a phantom. 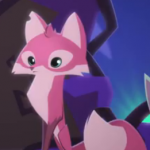