Treasure finder is a single-player land game that is available for all jammers. Located in the Snack Bar.

The goal of this game is to clear all the squares without uncovering the phantoms. To uncover a square, you click it. There is a number on it, and, the higher it is, the closer it is to a phantom. (Five being the highest.) Some squares don't have numbers. There are five levels. Each level gets harder, with there being more and more phantoms.

For uncovering a numbered square, you receive five gems. For uncovering a non-numbered square you get seven gems. You can also find rare item Mondays under some squares, but a chance of it is about 1/20. If you clicked in a large area without anything under it, you are awarded with 50 gems. If you complete a level, you are rewarded with a random den or clothing item, like in The Forgotten Desert. If you finish the final level, you can get a really rare item, such as a spiked collar.

The style of the squares is almost like the minigame Overflow, with there being obstacles that change in each level according to location.

In level one the color of the ground is a darker brown color, with grass all around the border. The possible obstacles are: a clump of grass, a toy bulldozer, a toadstool that is red with white spots, and a four leaf clover.

In level two, the ground is sandy with beach roses around the border. The possible obstacles are: a shovel and pail, a piece of driftwood, a clump of sand grass, and a shell.

In level three, the ground is orange sandstone like in Coral Canyons, and has darker orange cracks. There is cactus around the border. The possible obstacles are: a deep crack, white flower, a painted pot, and some purple desert flowers.

In level four, the ground is white snow. There are rocks around the border. The possible obstacles are: a rock, a sprig of a fur tree branch, a bare brown patch of melted snow, and some grass poking out.

In level five, the ground is dark red, with dry cracks in the soil like in level three, but these are bright yellow lava. Possible obstacles are: a deep crack, a small puddle of lava, a crater fuming smoke, and a rock.

In level six, the ground is a polluted phantom purple, with brighter purple spirals. There are rocks around the border. Possible Obstacles are: phantom vines, polluted puddles, polluted grass, and polluted stumps. 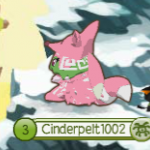